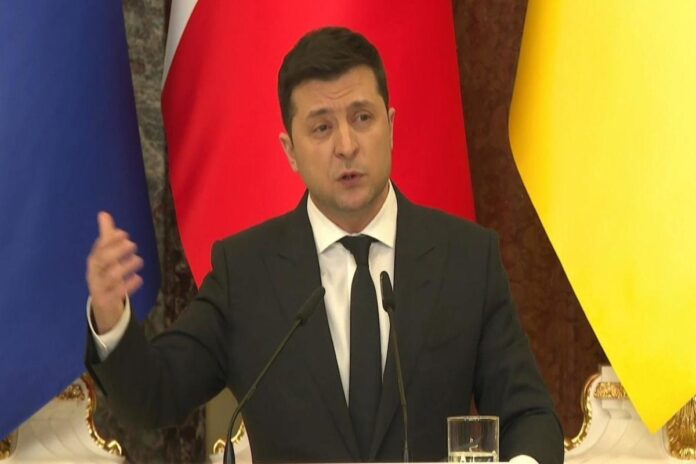 On Wednesday, in Kyiv, the Volodymyr Zelensky, the Ukraine President said in a press conference that “Now, the future of the European Security will be decided in Ukraine.

We are speaking with the leaders of Lithuania and Polish, Zelensky added.

Zelensky said that “We are unanimous in the assessment of the crimes of the Russia”. It is another aggressive action of the Russian Federation against Ukraine, its sovereignty,  Ukraine’s territorial integrity, Zelensky added.

The Ukraine president called for tougher sanctions against Russia for its aggression.

The military presence of the Russia in the Donbas occupied territory is hiding behind the uniform of the separatist, he added.

“This is an undermining Ukraine and attempts of international level to maintain the situation in Ukranian Donbas” Zelensky said. In addition to this he said that the response of the international community for this crime of Russian federation must be immediate, decisive and harsh.

Zelensky added that “we need to stop completely the project of Nord Stream, which is a weapon against Europe and the Ukraine.

Andrzej Duda, the polish president while standing next to Zelensky in a press conference, said that currently we are walking on a very narrow track of maintaining peace and stable development or initiating a war in the region. Poland also condemns the decision of recognition of Russian federation.

The current situation regarding Russia and Ukrain tension is extremely uncertain. A world can expect anything at anytime.