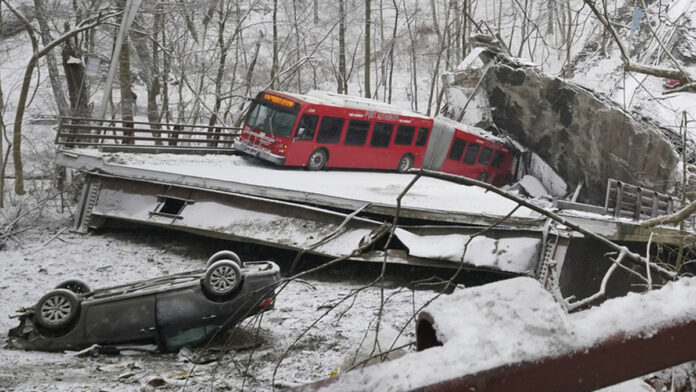 On Friday, President Biden scheduled his visit to Pittsburgh for some discussion associated with infrastructure. But, just hours before the President visit, a Pittsburgh bridge collapsed. There is no causality, but 10 people are seriously injured.

In 1970, the bridge was built with steel rigid frame and it was 447 feet long. According to the website of the Pennsylvania Transportation department, the condition of the bridge was not good. Due to this reason, the bridge was in “poor” category.

As per the department’s website, the rating of the superstructure and deck condition of the bridge was “4-poor”. In addition to this, the rating “6-satisfactory” was for bridge substructure.

The Pittsburgh Mayor said in a press conference that the bridge was inspected in September 2021.

This bridge is a significant part of the infrastructure because it is a way for the eastern community to come to the Pittsburgh. It also crosses the Pittsburgh’s largest parks that’s why it is considered as a “vital artery” in Pittsburgh city, Lt. Gov. John Fetterman.

Pittsburgh Fire Bureau Chief said that the collapse of city bridge just hours before the President Biden visit to discuss infrastructure is a huge surprise for all of us. The Pittsburgh is a city of bridges and the departments inspect bridges on a regular basis, he said. The situation is already stressful due to pandemic and this bridge collapse is another disaster.