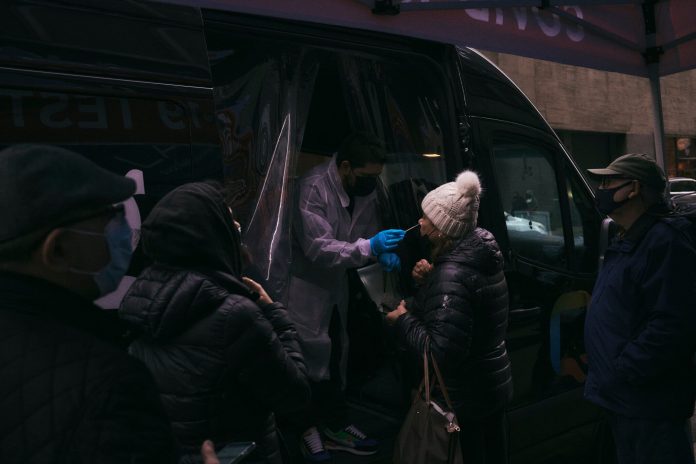 The latest reports of research teams of two continents described the severity of Omicron infection. It can cause mild infection as compared to the previous variants of coronavirus. No doubt, this report brings hope that the present surge may not be as terrible as earlier ones.

As per New York Times, the three research teams examined the Omicron variant among the population of England, Scotland, and South Africa. The preliminary results indicated that probably this variant will send fewer people to the hospital.

Since Omicron variant discovery in South Africa, the researchers have struggled to find out the level of its severity. They are trying to know that how dangerous this new variant of coronavirus is. The latest research suggests that the biological features of the Omicron variant make it less dangerous as compared to Delta. No doubt, the Delta variant caused many deaths and send a lot of people to hospital from early summer till today.

The less possibility of hospitalization due to Omicron infection in these three countries may be due to their high immunity level. A majority of the infected people already have immunity to this brutal disease. The protection is because of vaccination or from a previous illness.

As recent research is inspiring, scientists warn that the next wave can flood hospitals with cases of Omicron infection. The Omicron infection can spread more easily as compared to the previous variants of coronavirus. Christina Ramirez, a well-known Biostatistician of California university also warned people to take precautions against this variant of coronavirus.

Dr. Ramirez said that the Americans must take quick tests before the grand events of the holidays. On one hand, Omicron may cause mild infection, but on the other hand, it is spreading quickly than other variants. No doubt, it is now becoming the dominant variety of Europe, the USA, and several other countries around the globe.

The latest news from South Africa suggests that this surge will not last for a long time brings some relief. But, the cases of Omicron infection are increasing on a daily basis. The live coronavirus data indicate that the Omicron cases are also reaching their peak.

In the USA, on average the 154,000 cases are daily coming to the hospitals. The administration of drugs and food approved the Pfizer covid pill for the treatment of coronavirus on Wednesday. It offers a highly effective treatment against this brutal disease of coronavirus.

Paxlovid, a drug by Pfizer, has been found effective against this deadly disease of coronavirus. It is approved for a patient over 12 years of age or for those who are at high risk of becoming ill. In addition to this, it is reported by Pfizer that these pills are also highly effective against Omicron infection.

These latest researches confirmed that Americans will develop immunity and gain protection against disease because of booster shots and vaccinations. Furthermore, two hundred million Americans are completely vaccinated. The boosters are received by more than sixty-three million Americans. These are helpful to develop immunity and protect them from Omicron infection or control the severity of infection.

The Omicron cases surge was the subject of study of South African research. The researchers described that the hospitalization risk of infected people from the Omicron variant is 70 percent less than the previous variants of coronavirus.

Moreover, the authors also described that Omicron has the ability to reinfect the people who already suffered from Covid-19 one time. But, the infection will be milder than others. The variant can infect people and avoid the antibodies developed from past infections. But, a strong immune system can prevent the severity of the disease. So, in this case, the survival chances are greater than other variants of coronavirus.

According to the rough estimates of the researchers in South Africa, 70% of the people already suffered from Covid-19 before the wave of Omicron.  About 30% of people got their vaccination. The researchers clearly described that this protection from infection is due to vaccination and developed immunity.

Furthermore, the authors also indicate that the data collection was done during the initial stage of the Omicron wave. At that time the overall rate of infections was very low. In addition to this, at that time patients with mild symptoms were less likely to hospitalize.

A Scotland Research About Omicron Infection

The researchers in Scotland examined the ratio of Omicron and Delta variant cases of November and December. They focused on the number of hospitalized patients of both variants of coronavirus. The research described that the risk of hospitalization due to Omicron infection is much less than the infection caused by the Delta variant.

A professor of Edinburgh University and co-author of this latest study said that the Omicron Variant can send several people to the hospital quickly. He further said that no doubt, preliminary results indicate that the Omicron is less dangerous than the other variants, but still, people have to protect them from it.

An England Research about Omicron Variant

On Wednesday at Imperial College London, a team of senior researchers also compared the Delta and Omicron cases in the early weeks of December. They also reported fewer visits to hospitals by the patients infected by Omicron Variant.

As per the initial estimates, the cases of Delta variant are more likely to admit at hospitals as compared to the Omicron variant. On average, the percentage of the hospital visit of a patient infected with Omicron infection is about 15 to 20 percent only. Moreover, less than 40 to 45 percent of patients are supposed to be hospitalized for one or two nights.

The researcher’s team also studied various aspects of the Omicron variant. They also studied on the basis of its severity level for previously infected patients or a person having no immunity. After studying all the facts and figures, they also confirmed the findings of the researcher’s team of South Africa. They also described that previously acquired levels of immunity have a positive effect to lower down the severity of Omicron infection.

The differences in the results of the Scottish and English researches are due to the facts and figures they measured. The team of Imperial College London studied the patients who visit the hospitals as well as those who were admitted to the hospitals. While the researchers of Scotland only focused on the admissions of hospitals.

In addition to this, all three teams of researchers cautioned that these results are preliminary. Furthermore, the Omicron variant is spreading in the USA, Britain, and some other countries also. Older people are more vulnerable to develop the disease and have more chances of hospitalization also.

The Upcoming Situation is Uncertain

No doubt, the Omicron infection is spreading at a high rate. An Epidemiologist of Harward T.H Chan School of Public Health, William Hanage clearly said that unvaccinated people and those not suffered from Covid till now are more vulnerable to Omicron infection. He further explained that such people have no immunity to lower down the severity of infection. That’s why they have more chances to develop infection in the coming months.

The new data of hospitalization of patients infected by Omicron variant are now making the upcoming situation of cases uncertain. No one will say with authentication that how the Omicron variant will behave in the coming days.

The co-author of Scottish research and epidemiologist of Strathclyde University, Chris Robertson said that the holiday season limited our data collection. So, there is a need to update the findings of the research. But, the statement issued on Wednesday by the team of modelers who is also running a project of the Covid-19 Scenario Modeling Hub makes it clear that still many things need verification.

All the researchers warned that the information indicates that the Omicron infection threat is imminent and substantial, so governments and individuals should act accordingly.