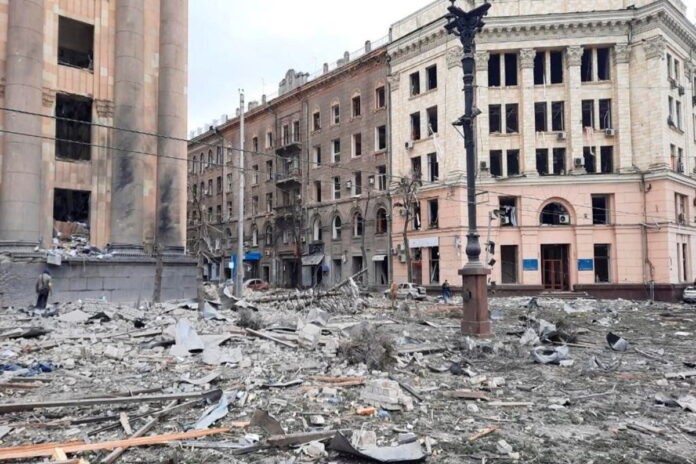 Tuesday Morning Blast destroyed a government building in Kharkiv, the second largest city of Ukraine. Due to blast, at least 6 people injured which also include one child, as per the statement of Ukraine‘s State Emergency Service.

The Ukrainian Government officials and the Ministry of Foreign Affairs also posted a video clip on social media that shows a blast in Kharkiv.

The government officials of Ukraine also shared a video which clearly showing a missile attack on the Kharkiv Regional State Administration building.

A separate video posted by the Head of Defense Staff of Kharkiv, Kostiantyn Nemichev, showed the aftermath of the purported strike, including the inside of the building which had been reduced to rubble.

The Regional State Administration building houses local government offices. It is located in the main square of Kharkiv “Freedom Square” and an architectural landmark.

Adviser to Ukraine’s Minister of Internal Affairs, Anton Gerashchenko, also shared a video on his official Telegram account taken from the Freedom Square at street level.

The video shows the site of the Russian attack, and the debris on the ground where the Kharkiv Regional State Administration building was previously existed in its full form.